Why I love being in the mountains 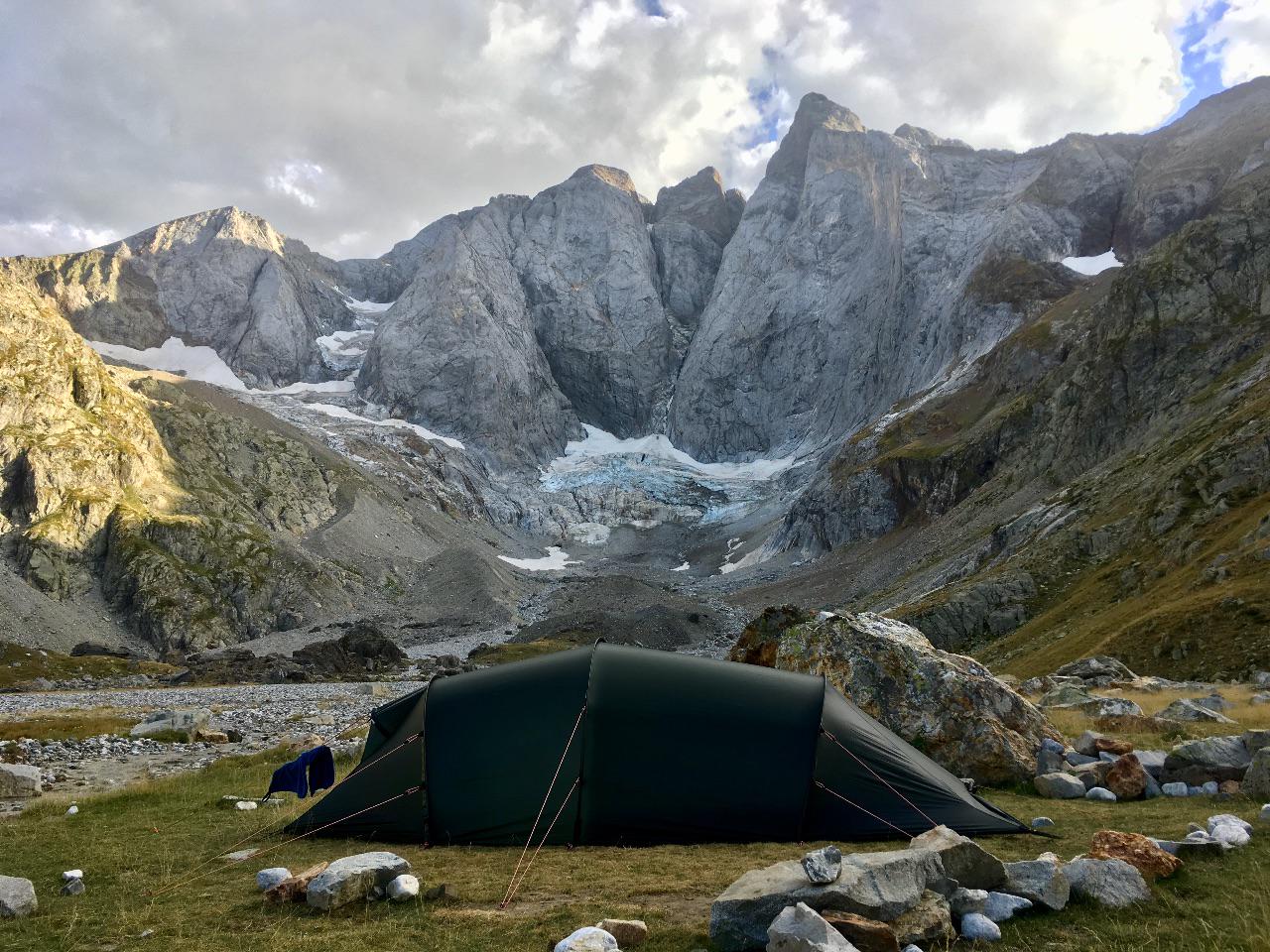 Bivouac in front of the North face of the Vignemale, in the French Pyrénées

Let’s say that it gave me the knowledge -which is mostly good sense really- and the self-confidence that are often preventing people from going to the mountains by themselves. They feel, justifiably that it may be dangerous, and therefore do not venture beyond well-marked paths leading to the nearest lake or waterfall.

My luck was that I got to enjoy the mountains beyond that early on. When I was young, my father took me to hike most classical summits of the Pyrénées. But instead of taking the classical way, which usually took little more than half of a full day of walking, he always chose a longer and less known variant, which took a couple of days.

We would overnight in the mountains, with all that comes with it: carrying a heavy backpack, find a place to sleep, drink a hot instant soup in the evening, look at the stars in the sleeping back, light sleep, a negotiation in the morning to know who would be the first one to get out of the sleeping bag in the morning and get the water in the nearest creek for the tea, which felt delicious even though it still tasted a bit of the soup of the evening before, packing everything again, start walking with a sensation of cold and the muscles a bit aching, knowing, however, that the bite of the sun would be considerably more painful.

Every hike had immutable rituals: arriving towards the end of the afternoon or in the evening at the trailhead to start walking while others were making their way down, hike for a couple of hours, while scanning the surroundings quickly to find an overhanging rock in case there would be rain during the night (we never carried a tent), the ascent the next day, always in short, changing to warmer clothes and pants on the summit and then the long, mind-numbing descent. And, at the car, the cheer joy to get the can of Coke that I would have hidden in the stream when leaving and drinking it in a few seconds.

It has been a few years that I haven’t been in the mountains regularly I miss it. I go to the mountains more or less every time I get some vacation. But during the lockdown, it was nearly impossible. So when we finally hit the Carpathian mountains for a long weekend around my birthday, it was really thrilling.

I went hiking the Pip Ivan trail, a moderate eight-hour walk leading to the third-highest mountain in Ukraine (just above 2000m). Its particularity is the observatory built on top, which was almost never used as such, as the Soviet Union took over that region. It slowly fell into decay over the years. I knew that, at the very least, should I get lost, I should see my goal. Or at least so I thought.

I made my way to the trailhead on June 1st which is incidentally the first day of summer in Ukraine. As nothing was marked, it took me a while with my rudimentary map and my GPS to find the start of the trail.

Then came this part that I used to dread and that I came to appreciate with the years. This first half an hour when your body is warming up and you are struggling with the steep path and the heavy backpack. What was just pain became a sort of ascetic exercise: building a rhythm slowly, step after step, without pause, until the pain subsides. Then I do not feel anything anymore and can go on like this for many hours. 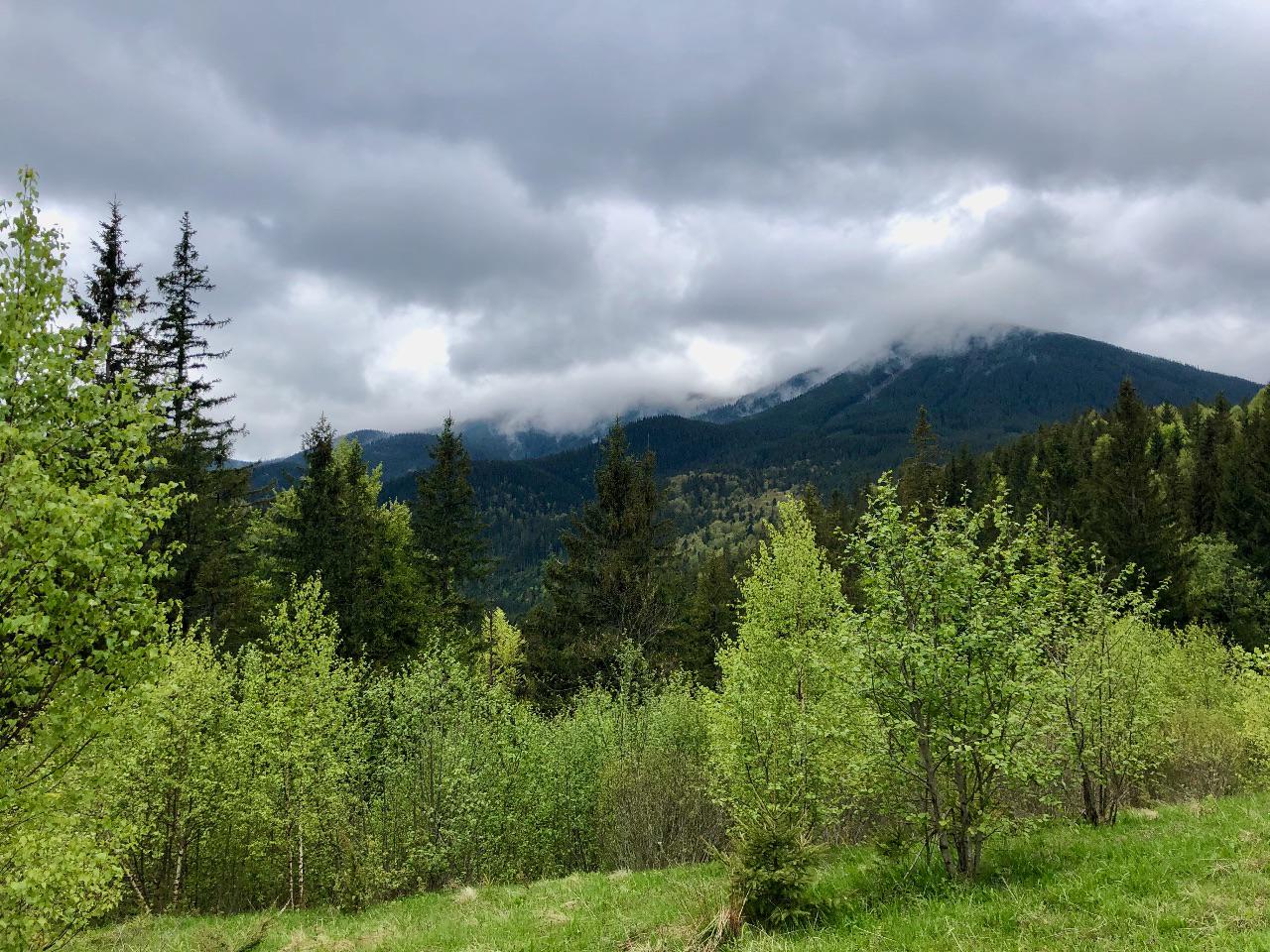 In the Carpathians, I reached that point when I came on the side of a shepherd cabin making the type of cheese they eat in this region, brynza. The dog guarding the house looked at me with placid eyes and let me walk past without bulging. 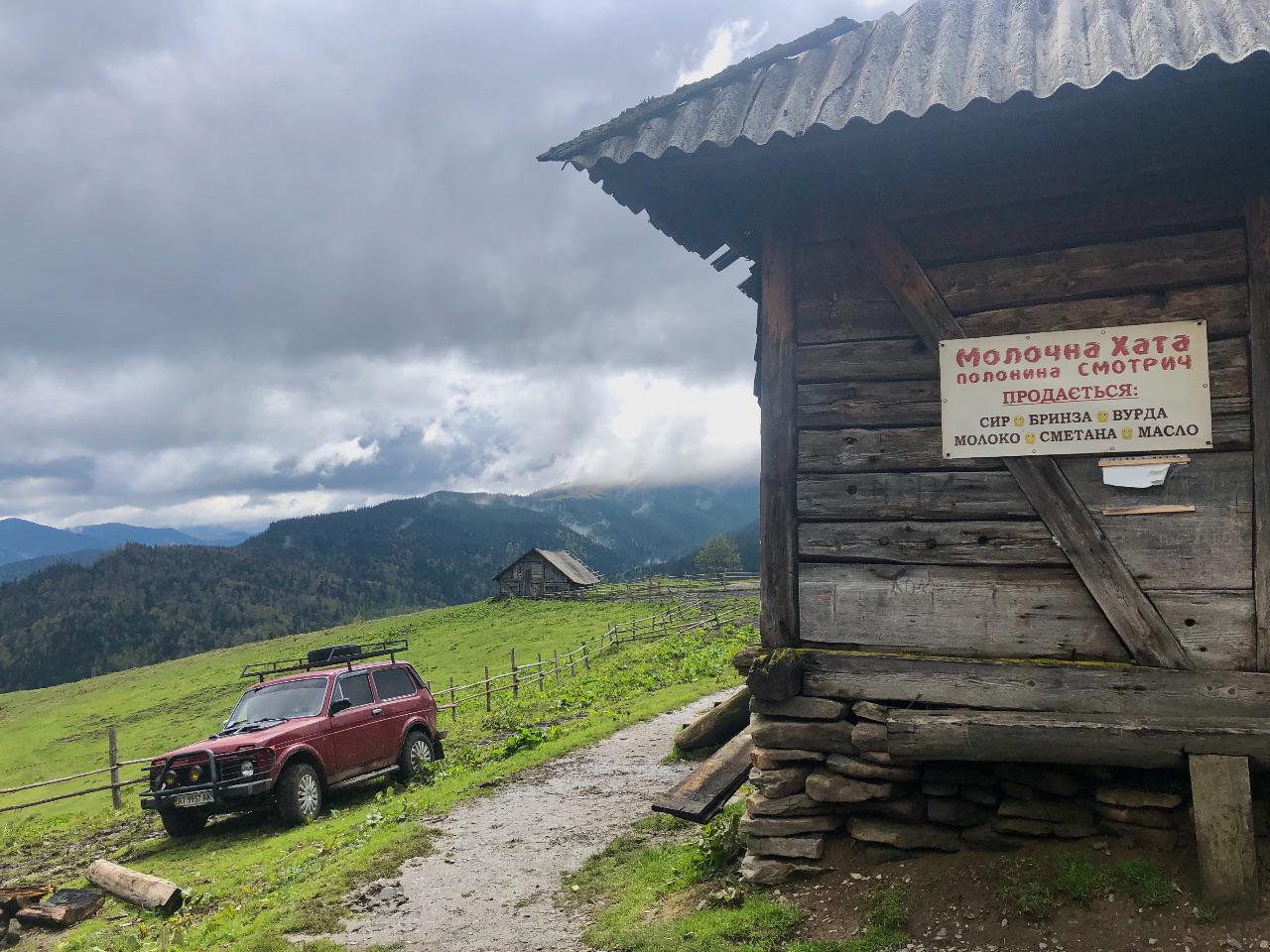 The path took an unexpected turn around a hill and got into a wild hollow. A last source of spring water and the conifer forest started, dark and fresh. 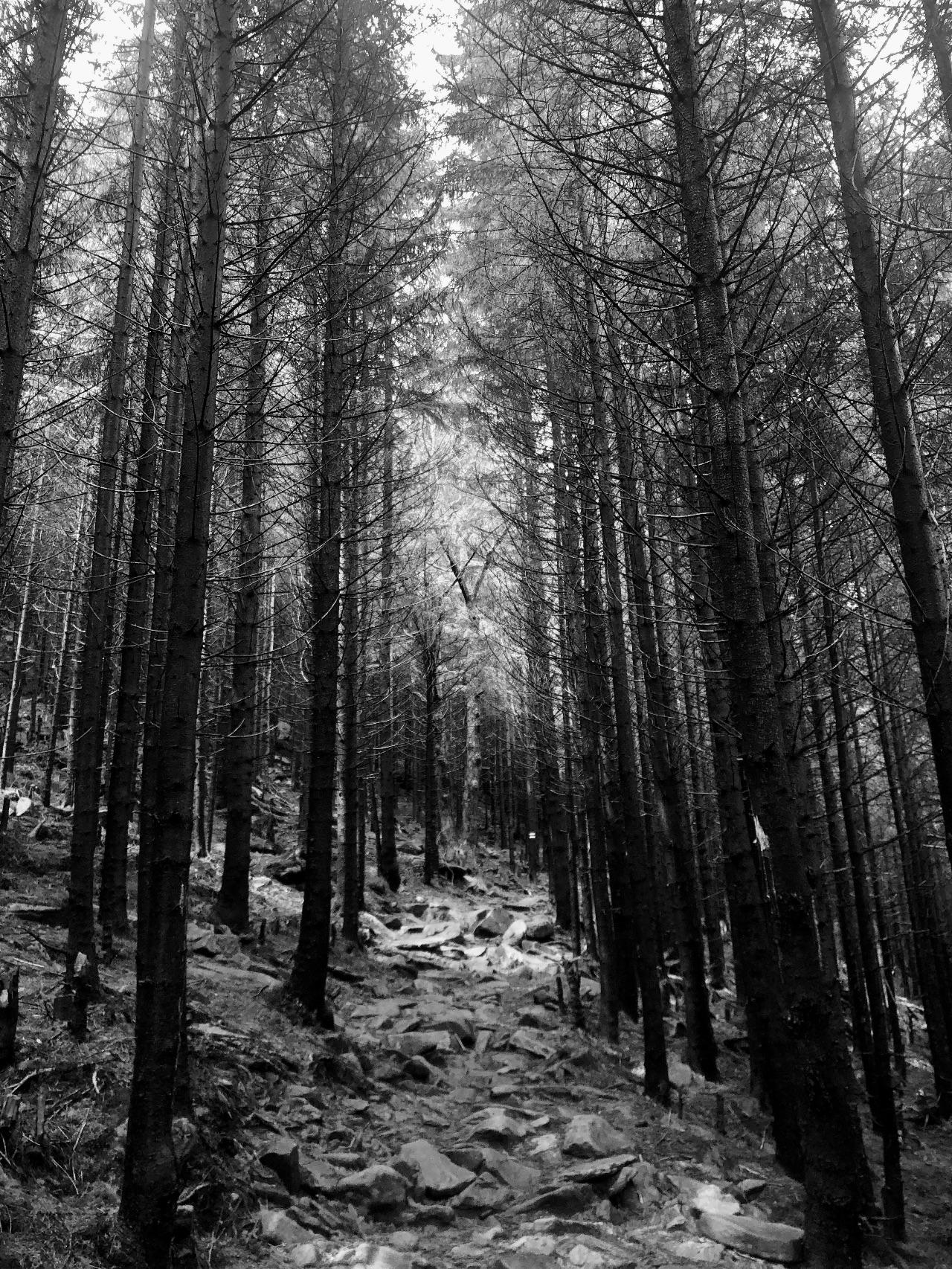 It is quite sad and hard to understand for me, but people dropped quite a few wrappers and empty bottles that I tried to collect inasmuch as it feasible. I then crossed a larger stream and got on a shoulder with monolithic rock standing out on the ridge. It reminded me of these strange standing rock formations that I had seen near in Stolby Park (Столбы) Divnogorsk, in Krasnoyarsk region of Russia. 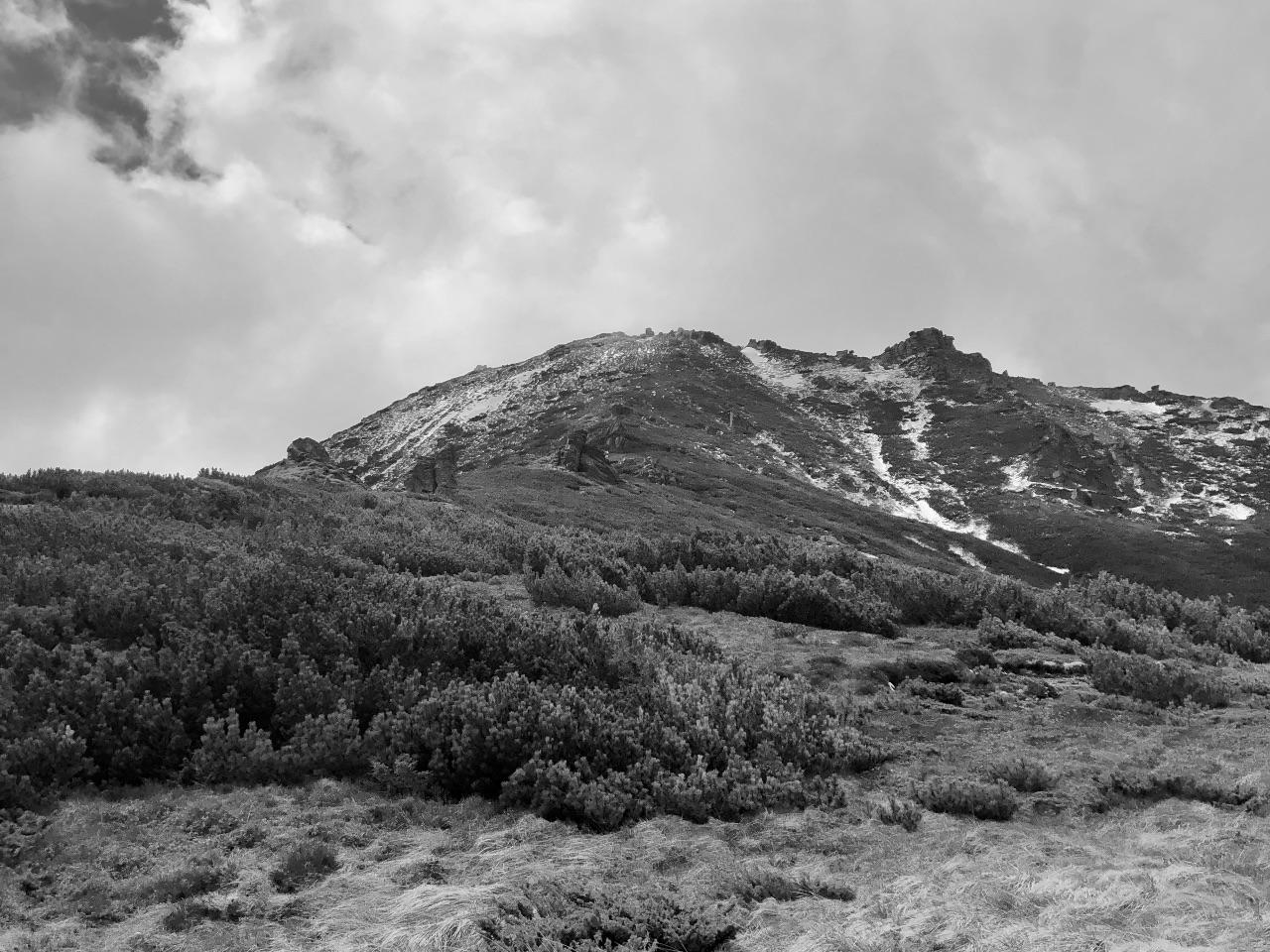 Some of these had been painted with the Ukrainian flag and the inexhaustible initials of many couple of hikers eager to leave a trace of their affection for each other.

It was then that the snow started. The snow still present on the ground, but also a bitterly cold wind that announced nothing good. I quickly took shelter and put my Gore-Tex equipment. Less than five minutes after that, a heavy fog covered the ridge and a sustained snowfall started. What a unique way to start summer! I had to cross a steep path without much visibility and struggled a bit. 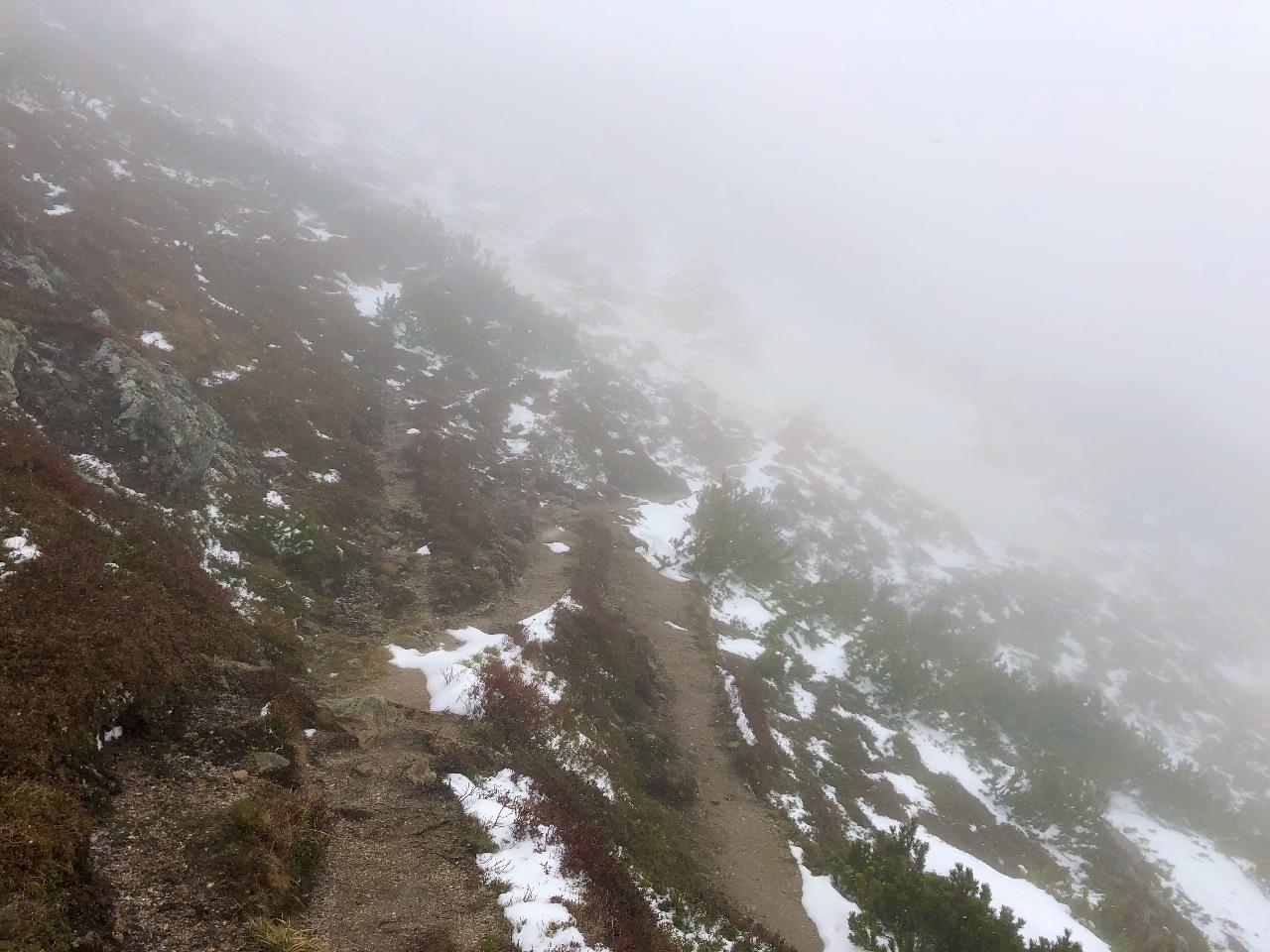 I reached a pass and had to orientate myself, with no visibility and only the white horizon. Then it was perfect, the very reason why I love the mountains so much. A pristine path, without any human trace (at that point, the occasional hikers give up, so you find very little garbage). All sounds are nub, because of the snow. 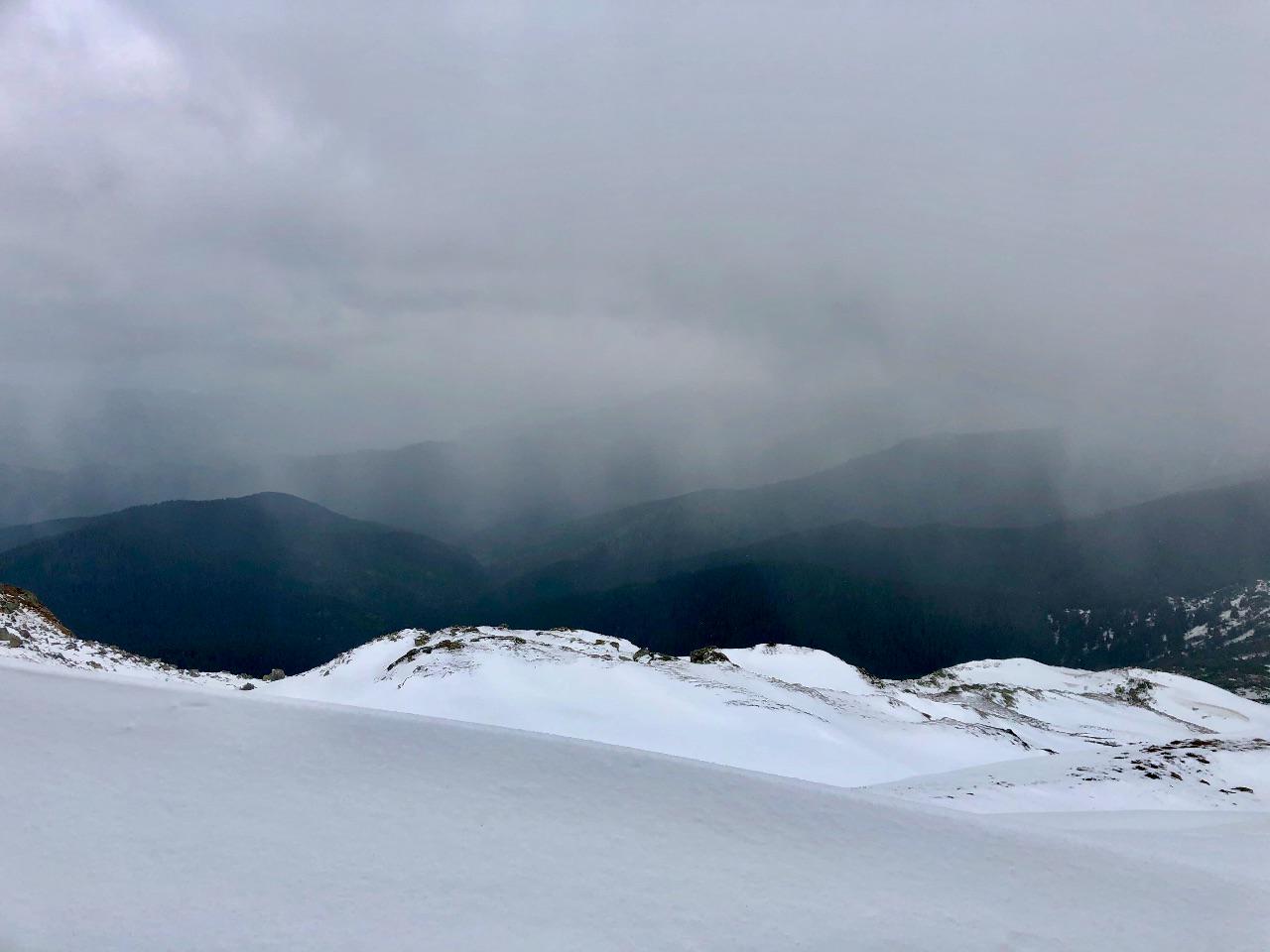 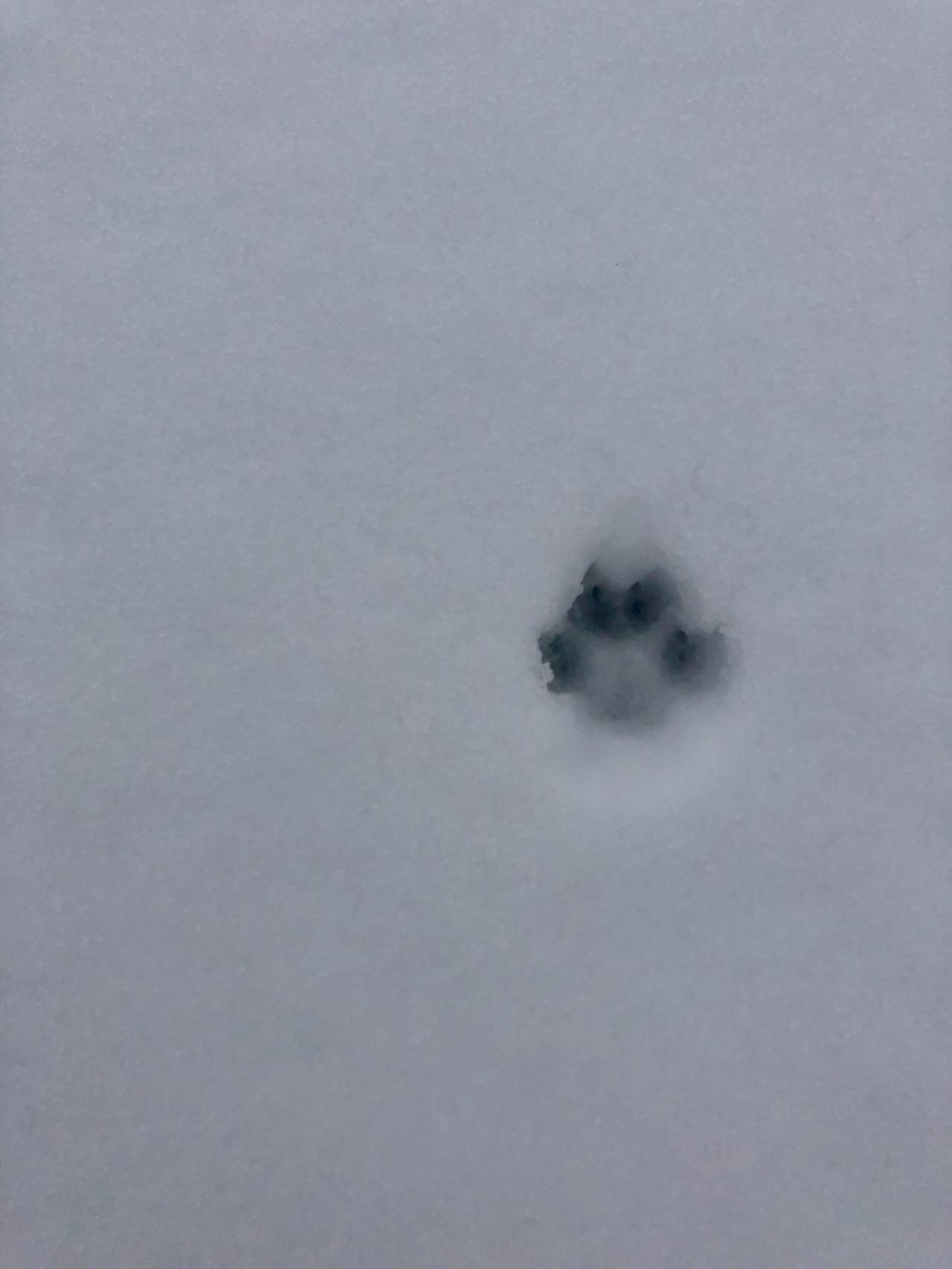 Here and there, you can hear the flaps of a bird's wing or gusts of winds. Apart from that, there is only the sound of your steps deep in the snow and your heavy and regular breathing. The air is pure and coarse. 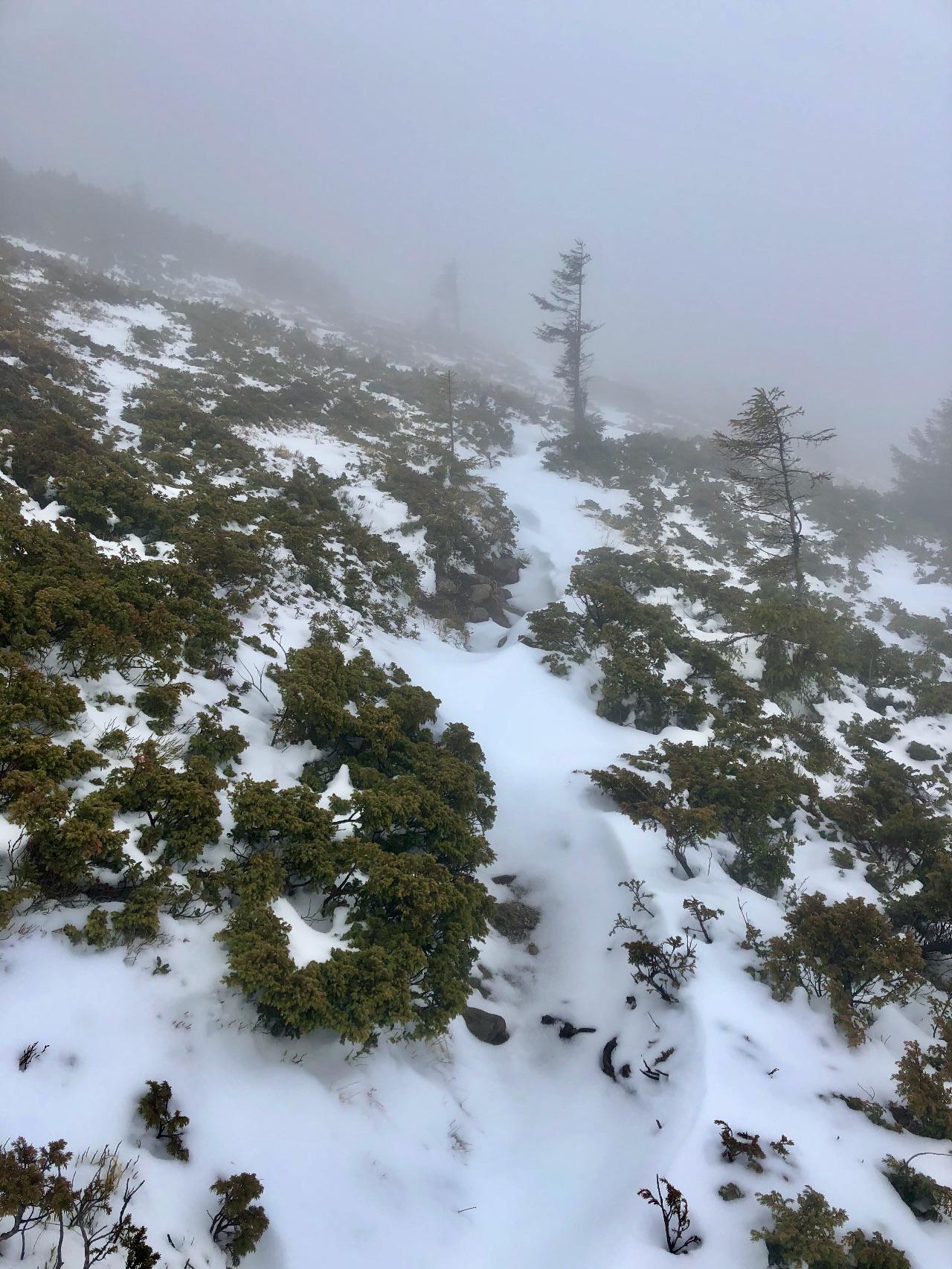 At that point, my rhythm is already quite set and I walk like an automat. Then, I suppose helped by altitude and solitude, your mind starts drifting and you become quite meditative. Things come in perspective and you consider them in a new, serene and detached way. You give priority to keeping the rhythm, like an obsession.

On that day, the snow became wind and sun and snow again. The weather was changing quickly and the evanescent reflections of the shade of the clouds on the snow were beautiful. 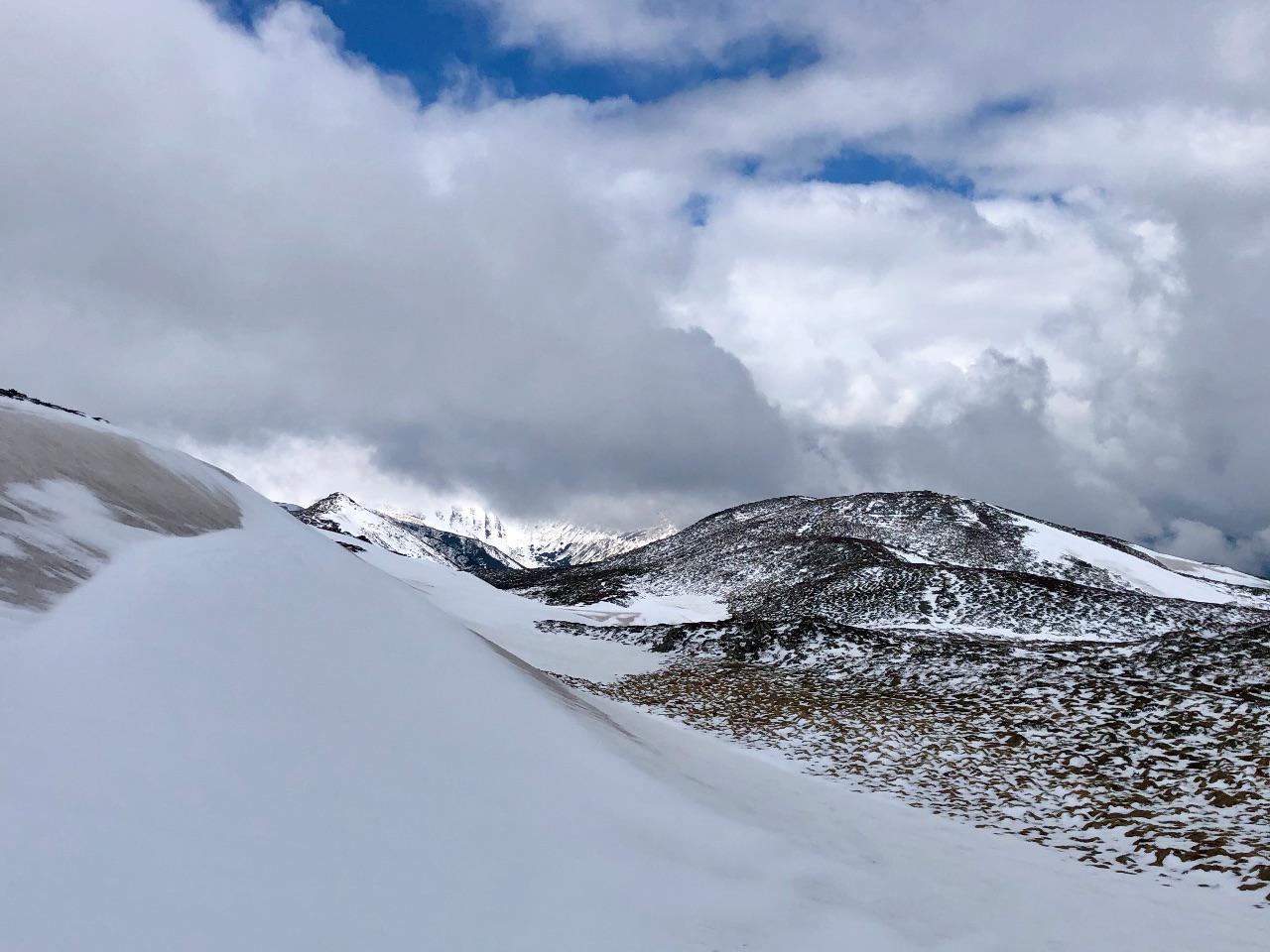 And there, I saw it, Pip Ivan fortress, appearing like a spectrum in the clouds, a black fortress surrounded by a world of white. 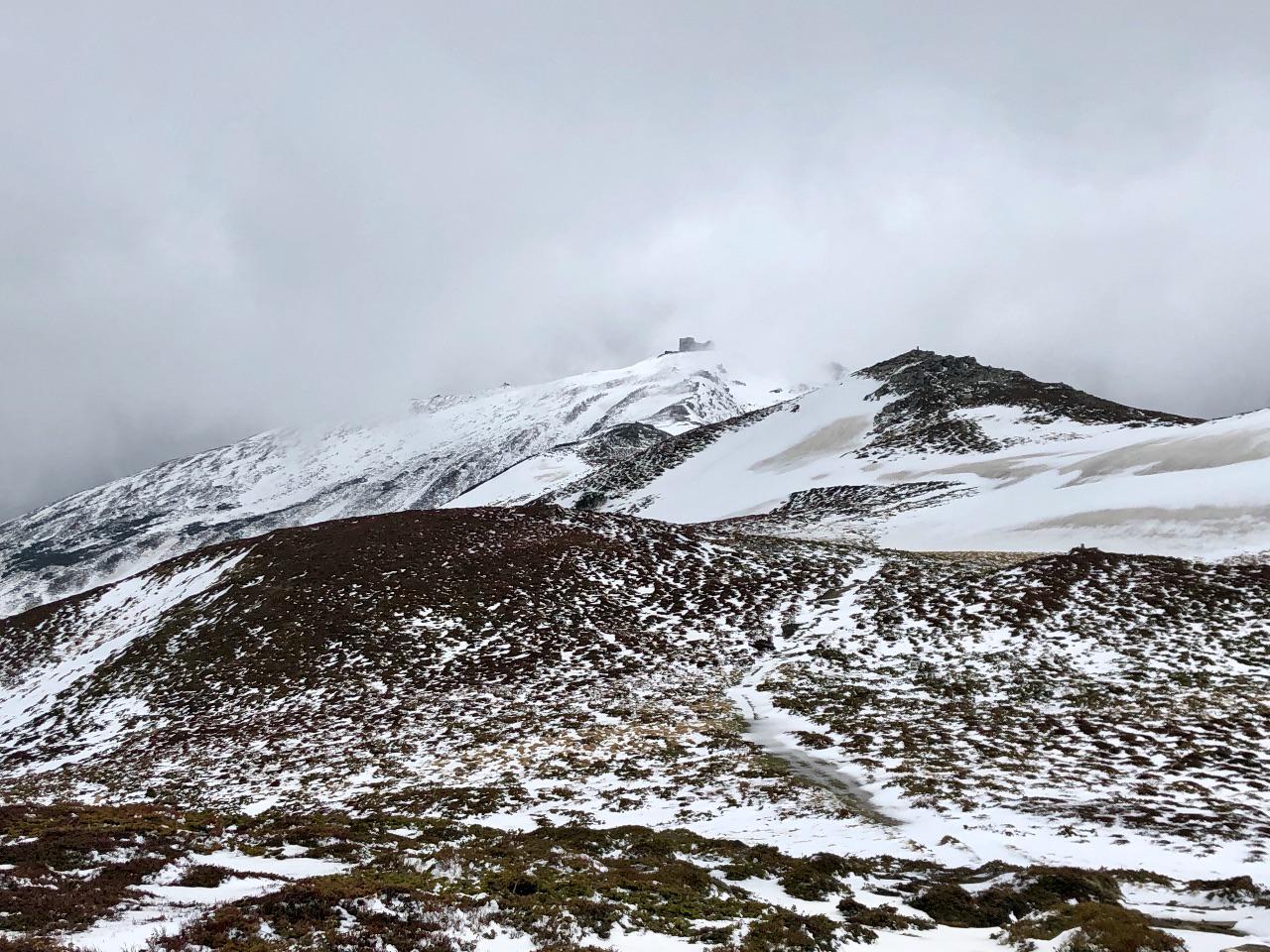 At that point I had been walking for about three hours. I was ahead of time, but I forced the pace, attracted like a magnet by the fortress. There was about 45 minutes left to walk up a pretty ridge. I reached the fortress, accompanied by a new snowfall and strong wind, almost disappointed that these walls were real. The fortress was falling into decay, but was still massive looking. I rushed into the open area to escape the wind and eat lunch. The staff from mountain rescue team staying at the top asked me where I came from and where I was heading, obviously a bit surprised to see a Frenchman by himself up-there.

When I walked out, the snow fall had ended and a beautiful clear sky opened up, revealing the landscape I had only been glimpsing here and there. It was exhilarating and I walked down at a good paced, with the silence just broken by a helicopter doing rotation of some kind in the area. 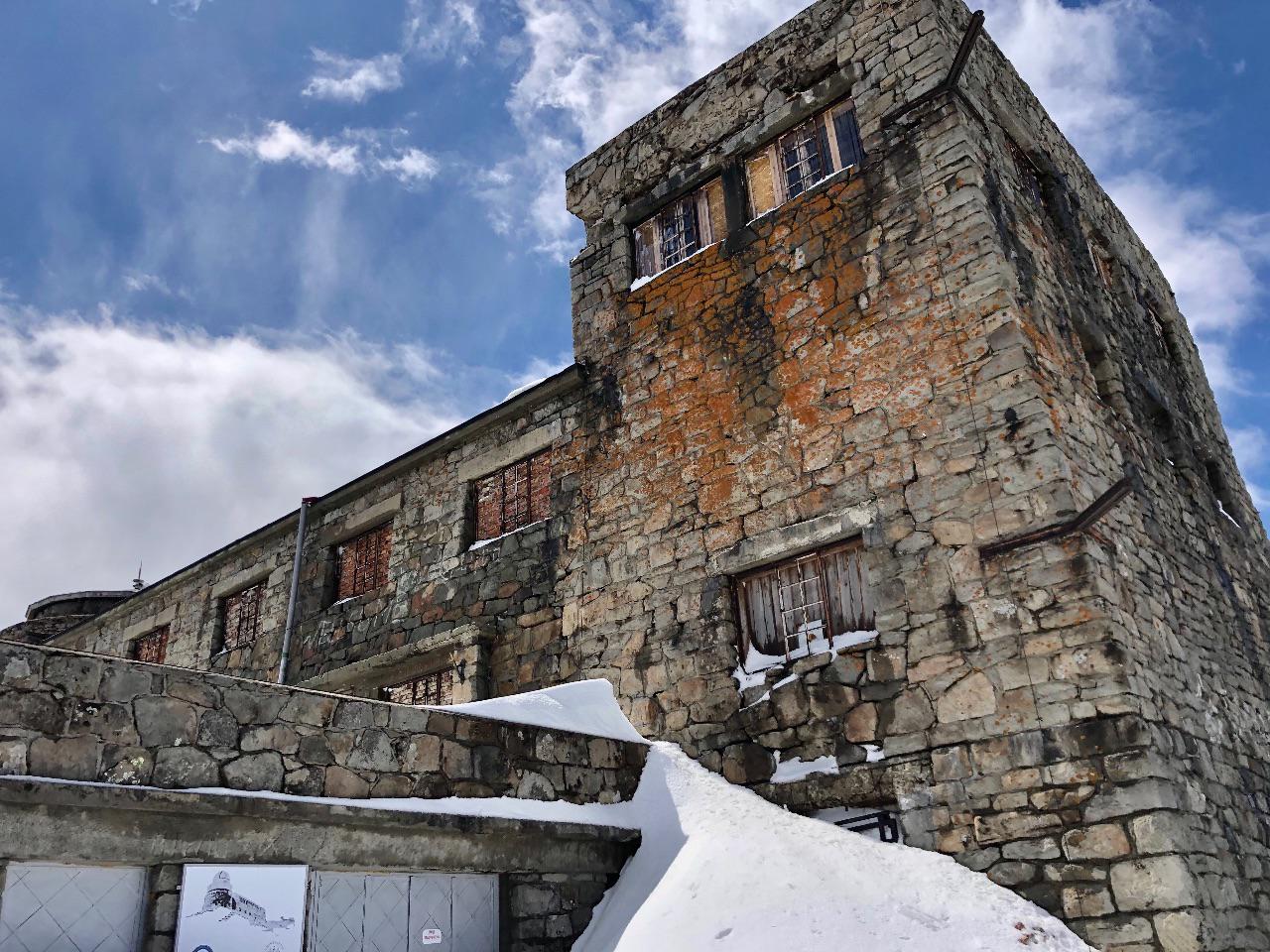 A last look at the crumbling observatory 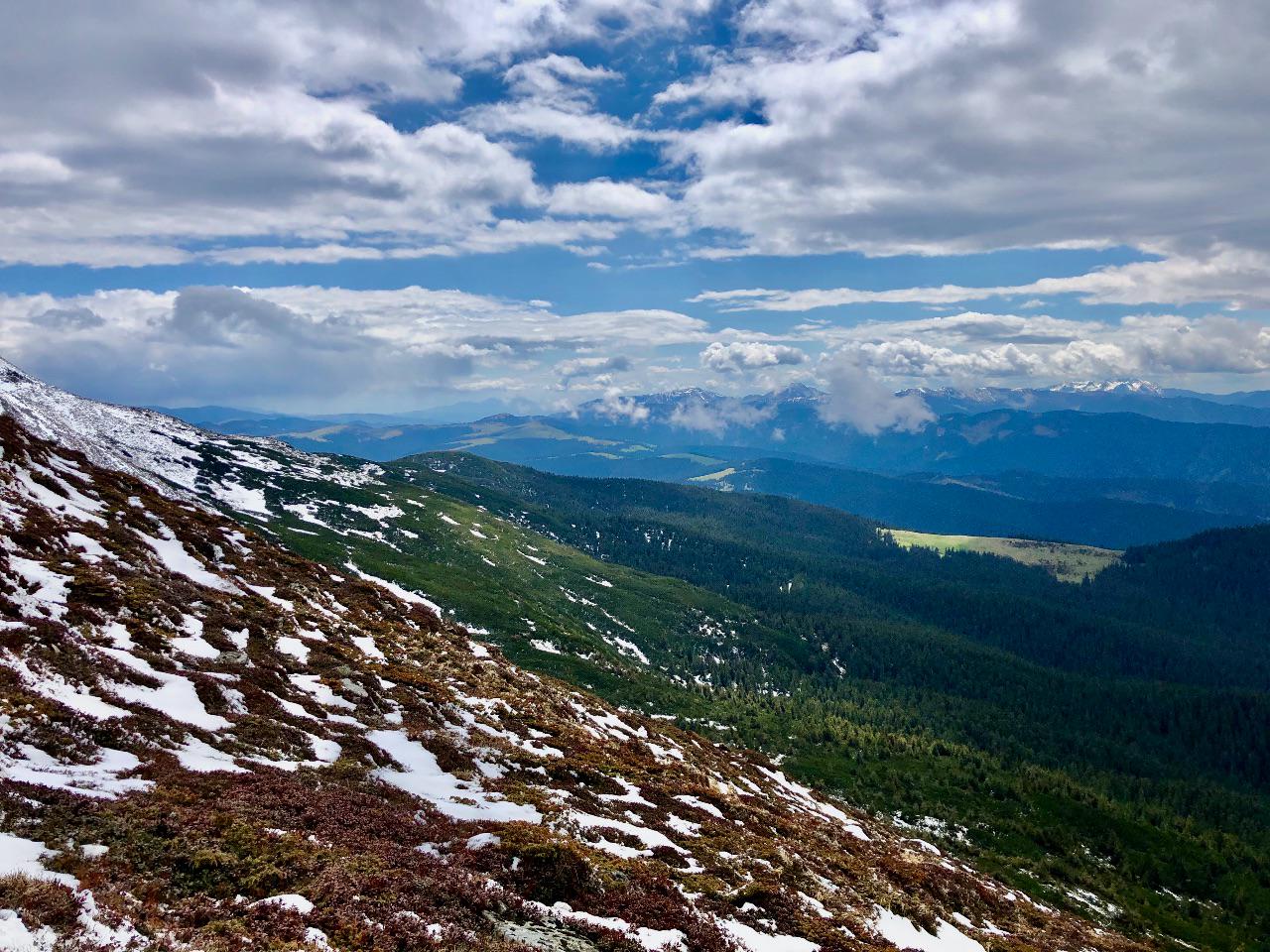 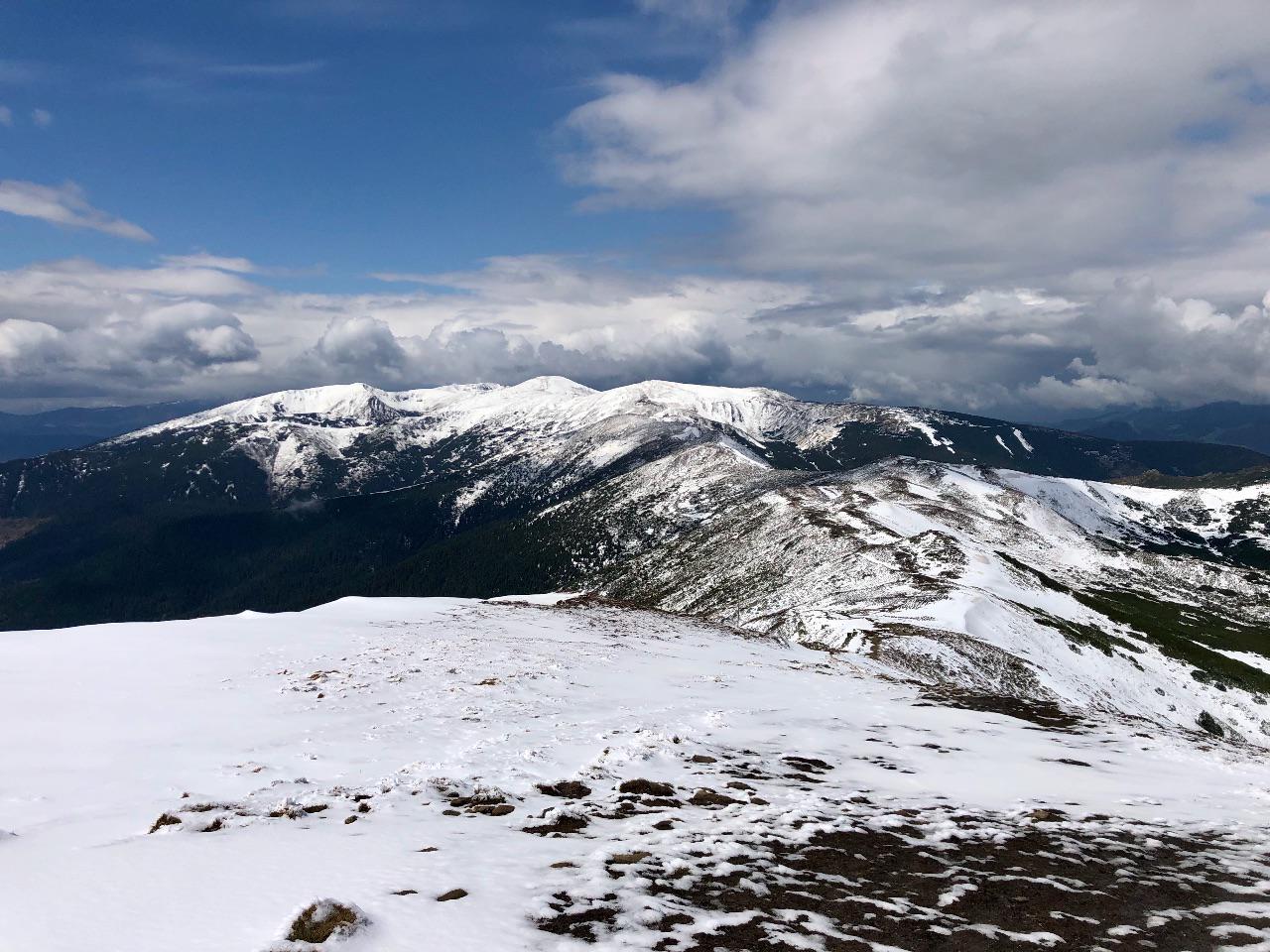 I bought some brynza and some pollen when I reached the cabin of the shepherd on the way back.

All in all, it was just a six hours’ hike, but it fell as usual like a much longer inner journey with many emotions, through all seasons. 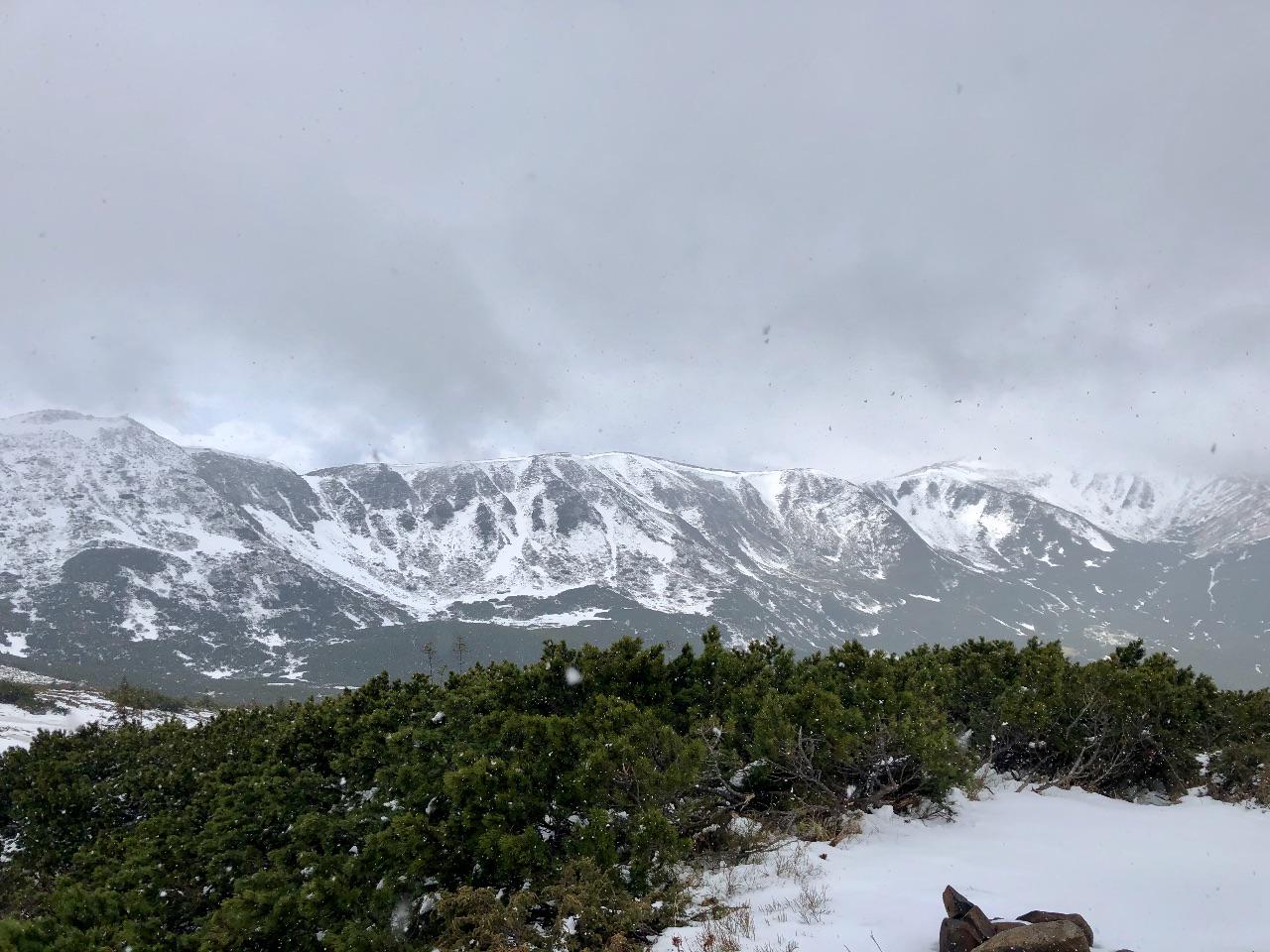