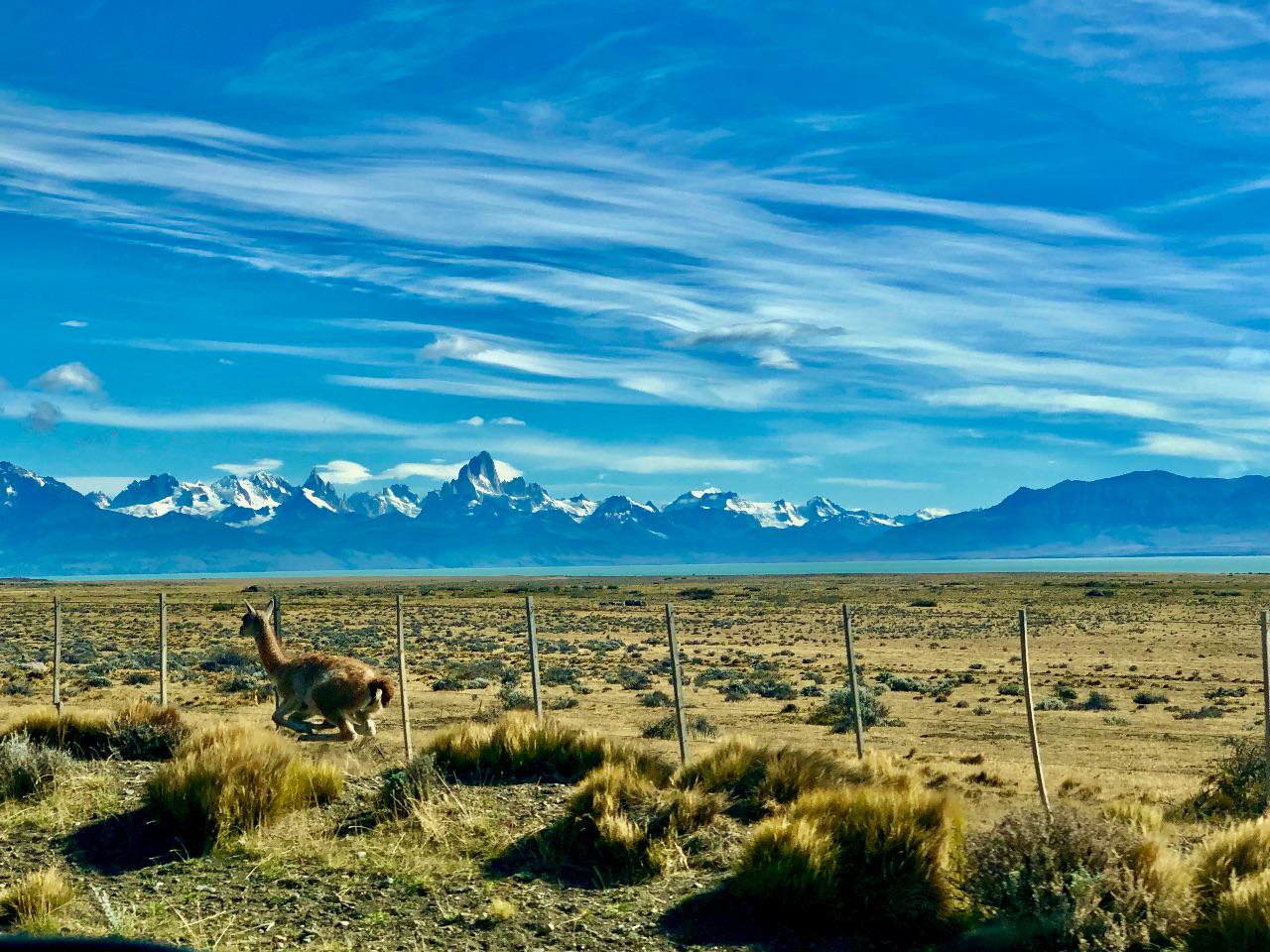 A guanaco with the lake Viedma and the Fitz Roy behind

This was an unforgettable trip. Initially, when we had arrived in Buenos Aires, the plan was to spend a couple of days in the capital, then head to El Calafate for three days and then fly back and probably head north. The tickets were bought. We flew during the night to El Calafate and landed at six in the morning after four hours of flight...

But then the sheer beauty of the desertic landscape with the silver silhouette of the Fitz Roy behind the Viedma Lake (any Russian origin for this name?) struck me and I knew we would not fly back to Buenos Aires as planned. Got into the airport, a nice cozy small and new airport in the middle of nowhere and we looked at the sunrise while the plane, which had just made a stopover took off, heading to Ushuaia, where I decided we would also go.

Before getting outside of the building where I had arranged a pick up, I looked randomly at a window and picked up a Kara-Kara (a bird looking like a small eagle or a big raven) eating a mouse. I was under the charm. Outside, a few meters from the parking lot, it was the steppe already. I was truly happy, with a smile of my face that did not fade away until very long after.

I had arranged to stay at a place at the end of the world. We drove three hours (2,5h out of which on a dead end, not asphalted. That's where I took the picture on top of this post. The more we drove, the wilder it got, and the more amazed I got.

Then we took a left turn and the very end of the valley opened before us, together with an incredibly strong wind, one that makes Patagonia's legend and turn a lake into a stormy ocean. 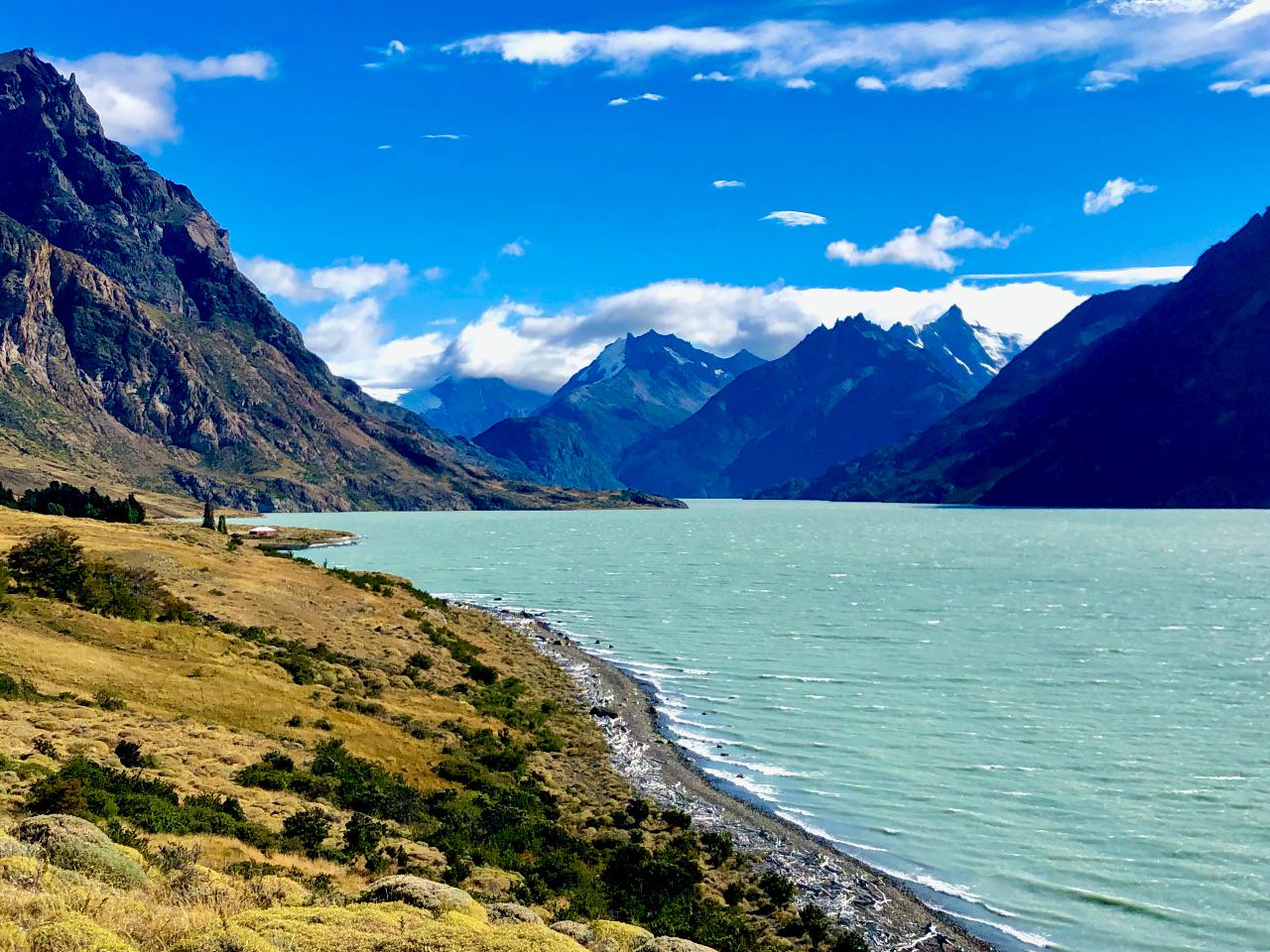 Terminus: there is nothing after except endless glacial cap leading to Chile

Three enchanted days at the end of the world and incidentally at the end of the touristic season, with the perks of being the only clients left before winter would set in and they would close the place. It was a crazy Finn who set up this place in this location and patiently grew trees that grew on one side only because of the incessant winds. He groomed these trees and it made the place somewhat liveable. There was even a -very- slow wifi in the living room of the “hotel”.

We took a few hikes, one of which to this incredible lake. It was the only time that my GPS (a real GPS, Garmin 64S), got completely lost and showed me that I was west of Senegal, somewhere in the Atlantic Ocean.

I lost track of time and walked and walked, at time spotting a guanaco and unfortunately not being discreet enough for the cougar. I admired the colour of the fall and this vegetation that was so different. 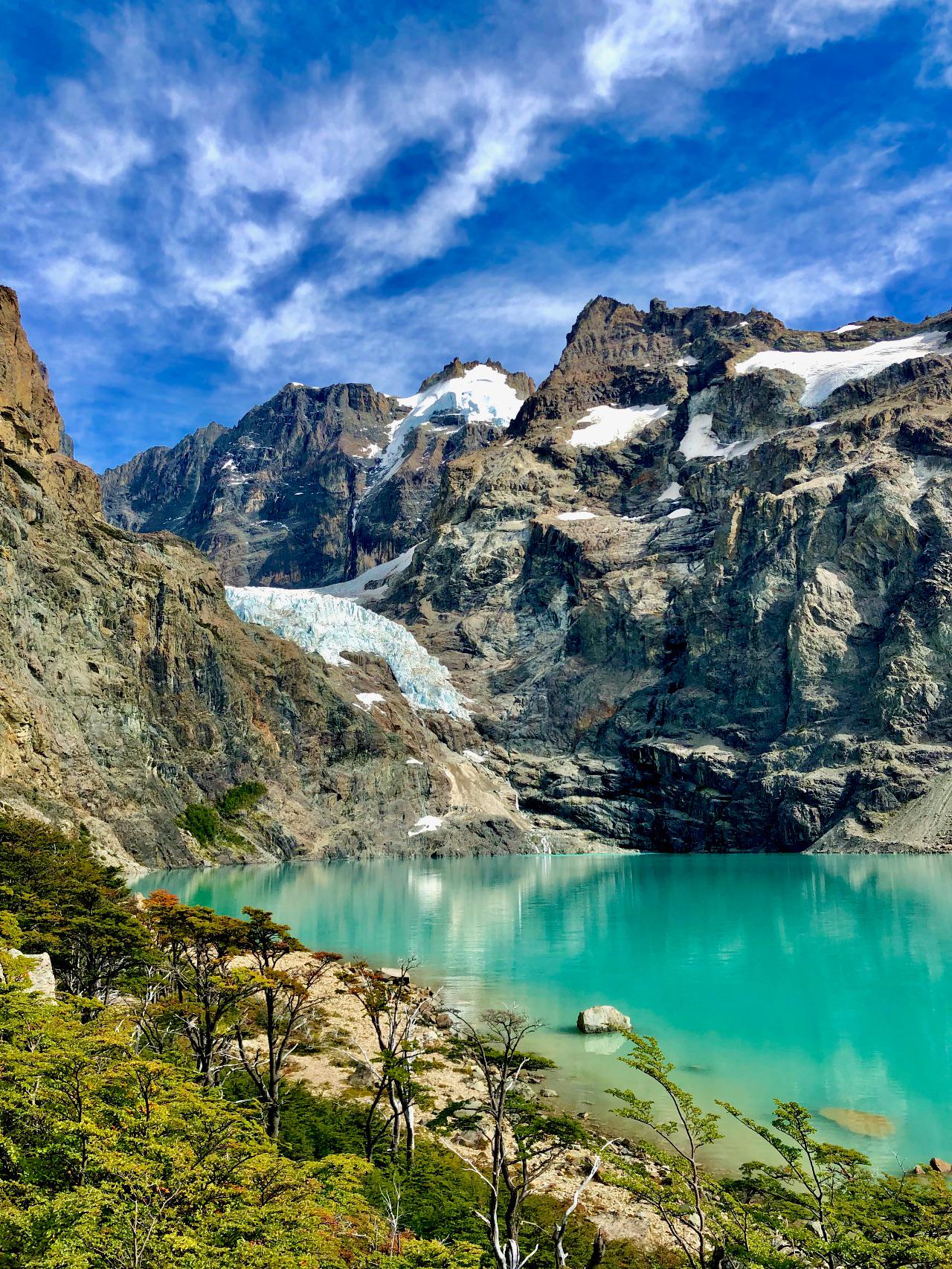 Once at the lake, I would easily have set up my tent there for ever... It was truly magical, with this typical turquoise blue from the glacier's sediments.

After a few hours there, we headed back down reluctantly, with the impression of having lived a unique experience. The guide, Cristina, was so nice, answering all our numerous questions.

I had to get closer to the Fitz Roy, and that's what we did once the stay “at the end of the world” was over. There, the Fitz Roy granted us a truly magnificent welcome for which I will always be grateful. 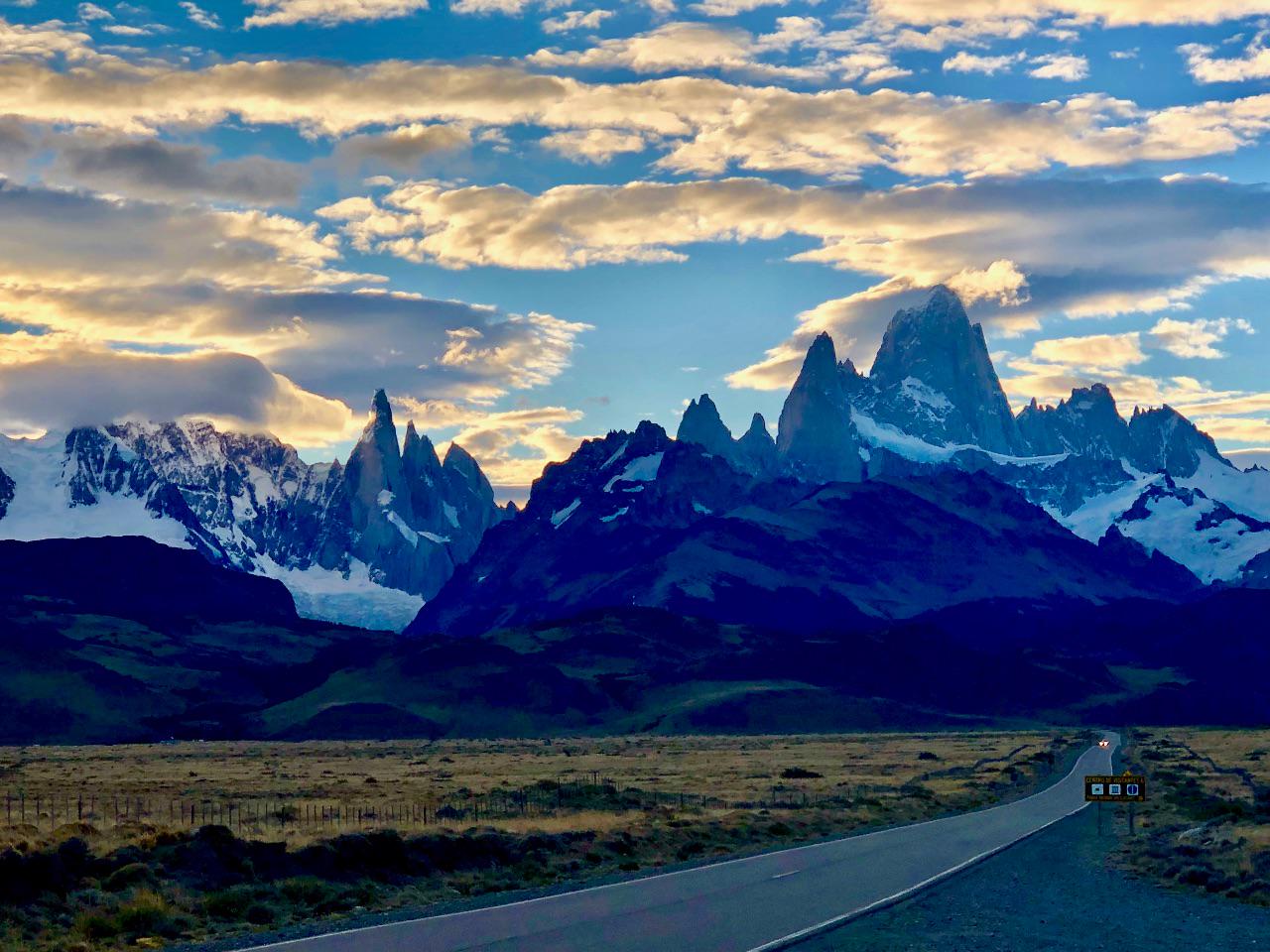 We reached El Chalten, this pioneer-hippie type of resort built from 1985 at night. The next morning, we headed for the closest lake to the Fitz Roy, the Lake of the three glaciers. Too many people, but it's hard to beat the crowd.

It's a tricky 7h hike, with a rather easy start and a 1000m+ steep hill at the end. The approach is spectacular and the scenery unbelievable, with the rock taking many shades. 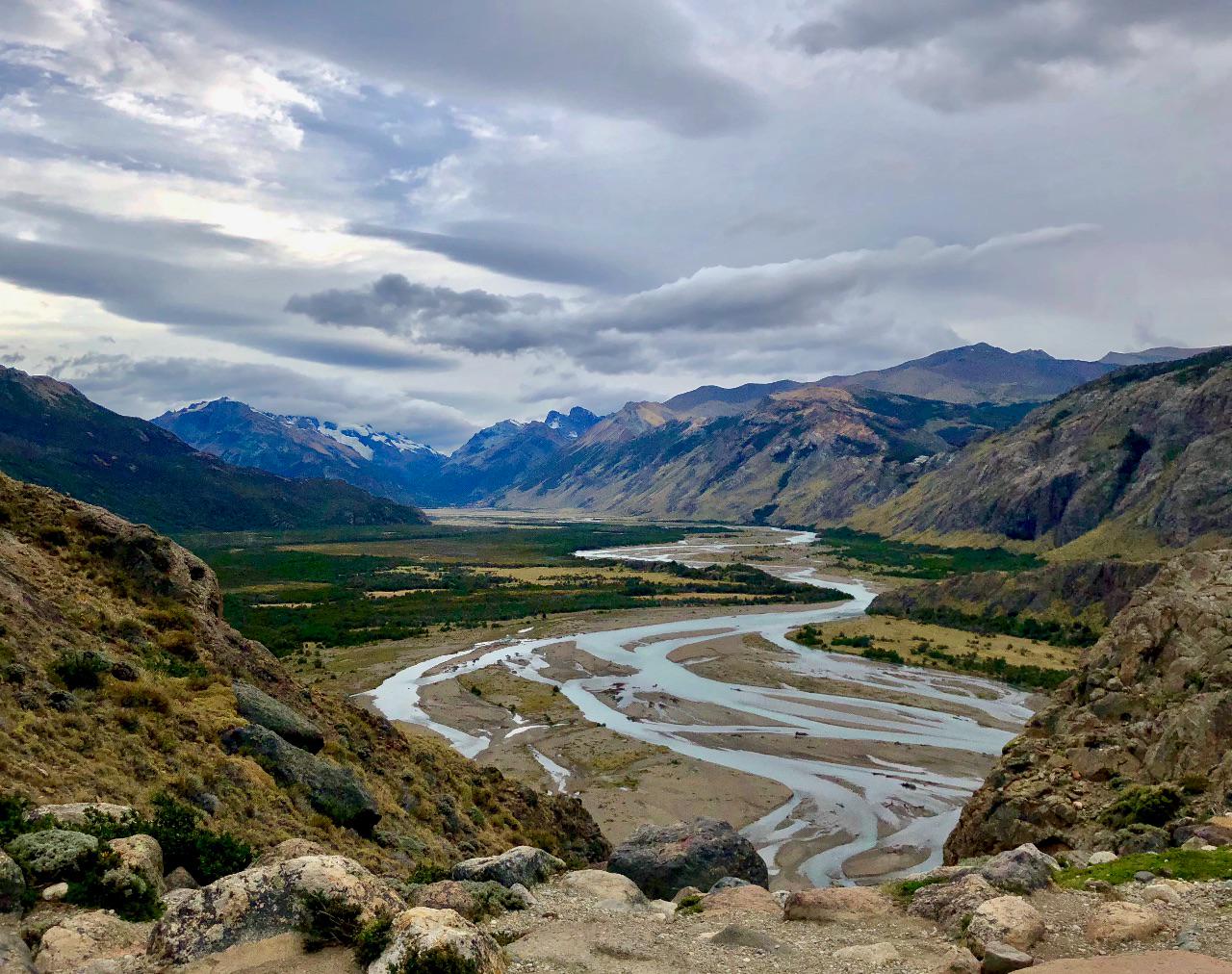 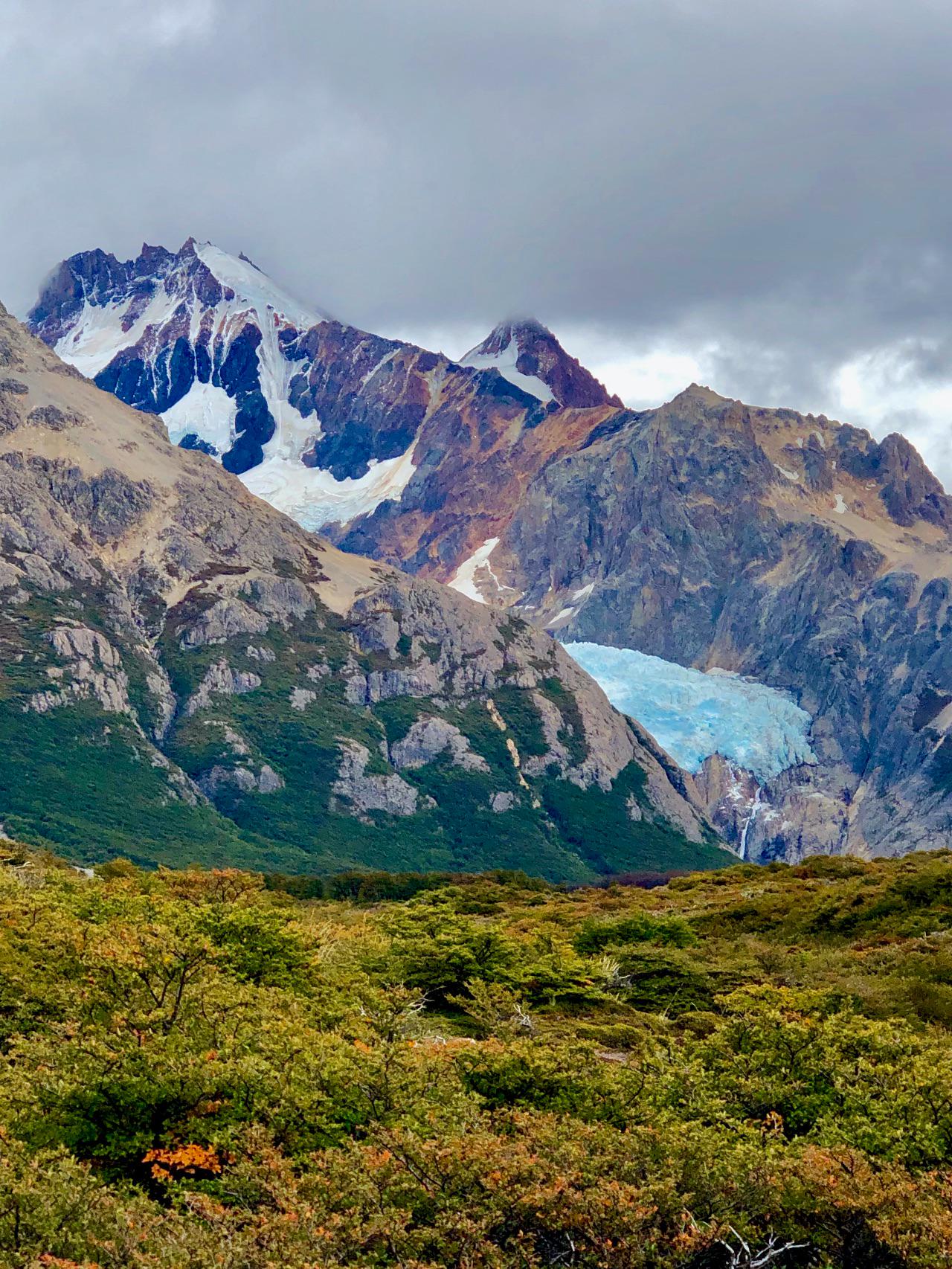 At the end, we were at the feet of the Fitz Roy, who decided to be shy on that day, protecting us from the painful bite of the sun. 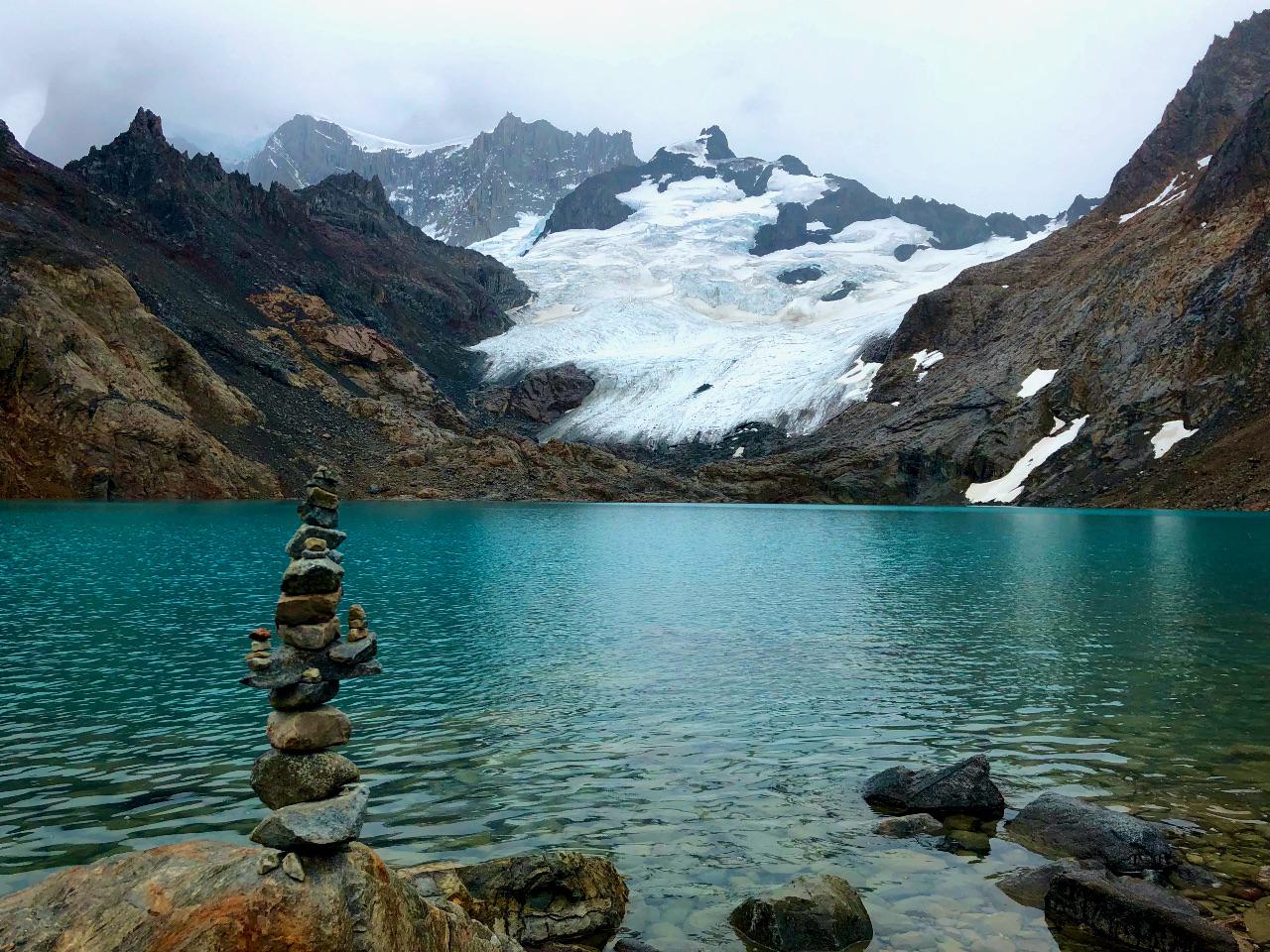 We just got a peak on the way up. 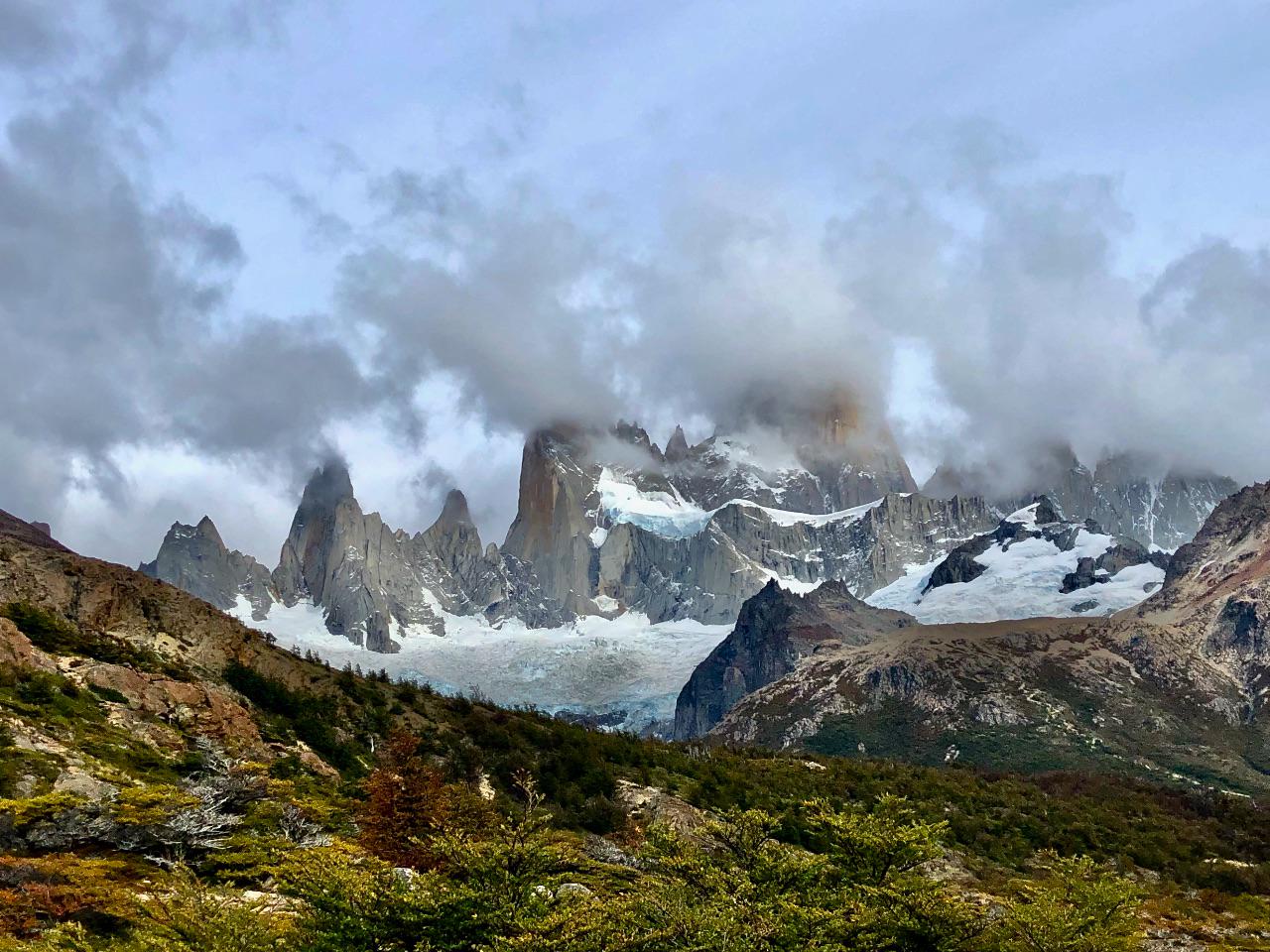 The Fitz Roy, hiding behind clouds

A hike that I will never forget... To be continued...